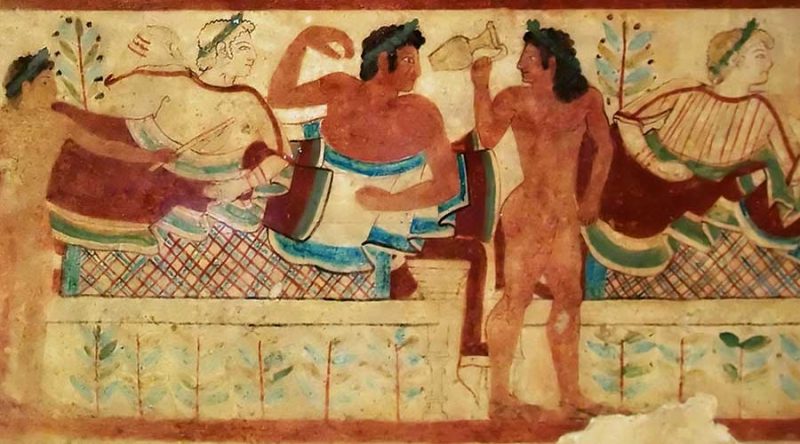 “One day, Dionysus was the guest of Eneo (Oineùs) and fell in love with his wife Altea. When Eneo re­alized this, he decided to leave the city on a pre­text. Dionysus slept with Altea, and their union led to the birth of Deianira; then, in exchange for his generous hospitality, Dionysus gave a vine to Eneo and taught him how to plant it, stipulating that his offering be called Oinos, in honor of the name of his host.” (Igino, Myths, 129).

One of the many myths about the origin of wine (this one being of Thessalic origin) was established well before the arrival of Dionysus himself in the Greek Pantheon. The myth dates back, in fact, to the third millennium BC (the Sumerian period) and is the founding poem of western culture: the Gil­gamesh Epic, wherein the figure of Siduri, “the girl who makes wine”, is custodian of the knowledge (of “thought” and “word”, hence lògos), which perhaps allows mortals, by means of a fleeting Montalian “passage”, to achieve a connection with the Beyond.

The “spiritual” drink that Siduri gives to Gilgamesh is by no means “natural”, but absolutely “cultur­al”, a watershed between the wilderness (vitis labrusca and grapes picked from the vine) and civ­ilization (vitis vinifera and the domesticated vine). Wine, therefore, in ancient mysticism, is a vi­tal element “par excellence”, which, over the centuries, became the Blood of Christ and a formidable metaphor for the three monotheis­tic religions of the Mediterranean basin. Even the prohibition of its consumption in the Islam­ic world is an implicit recognition of the ritual power of the nectar of wine.

In fact, the success of a drink that has accompa­nied homo occidentalis since 7,000 BC could not be explained if its origin were not anchored to the Myth: hence the belief in its magical, esoteric or pharmacological properties: Caesar uses wine to fight an epidemic of plague that threatens his ranks (Plutarch, Vita Caesaris). In the ninth cen­tury the Salerno Medical School recommended its use in a “sober diet”: “Inter pastam bibe vinum!”

So much of the vocabulary of our world derives from the Myth: the grape itself (àmpelos) takes its name from the first love of Dionysus, the satyr Ampelo, whence for example, the word ampelog­raphy originated.Many names of vines remind us of archaic stories, of the migration of populations, myths lost in the mists of time: Aglianico, Casavecchia, Malvasia, Teroldego, and so on.Despite the contribution of technology, and de­spite the very modern way of producing it, wine, in some ways, is still a Myth; it is enough to think of champagne and its evocative power.Man will always need the Myth as religio (glue, from “rilegare” (“bind”)), able to “compensate” social inequalities (Barbera and Champagne, G. Gaber), and to create a “cultured” awareness, able to stimulate the action of a community to­wards a goal: wine, a link between archaic ele­ments and allegorical legends, will accompany us in this pleasantly insinuating way, throughout the coming millennia.
di ANTONIO MAZZITELLI
Articolo tratto da“Il Sommelier”