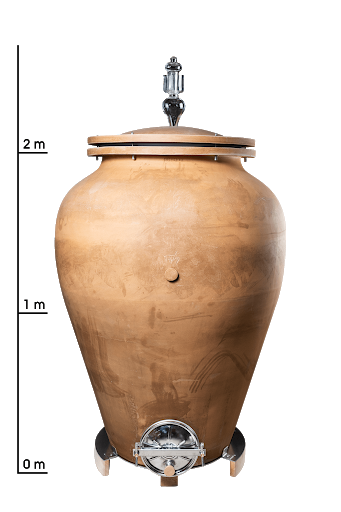 In recent years there has been a serious confrontation between the two most well-known containers used for wine-making: on the one hand the wooden bar­rel, on the other the amphora, which has come back into fashion following the outstanding work of several wine-makers and oenologists who, with considera­ble ability, have breathed new life into the use of a container that had – although not completely – disap­peared from the scene.

The challenge, however, was not confined simply to the oenological field, but often took the form of ide­ological ‘shores’, where the use of the amphora was depicted as a sort of return to the ‘origins’, to a past almost irremediably lost to contemporary man. However, the use of the amphora did not disappear by chance or because of a conspiracy inspired by modern industry, but because its use was drastically overtak­en by the potential hidden behind the container that we all know: the wooden barrel.

This “admirable instrument”, as defined by one of the most important French wine historians, Yves Re­nouard, began to be used in the Gallic-Roman regions of the French Alps as early as the second century AD, and by the end of the fourteenth century had become the standard container for the transport of wine and for vinifying grapes throughout Europe. However, the use of terracotta jars did not disappear completely, especially in the Mediterranean area, but the barrel was the best option for large-scale transportation: this wasn’t due to tasting reasons, but to logistical and economic reasons. At the very beginning of XV century the commercial revolution, which had started in the second half of XIII century, had reached its peak and ratified the birth of mass marketing for several goods, especially heavy goods such as wine (the so-called big goods). For the first time, it was finally possible to ship large quantities of wine, through long sea and land routes, from one side to the other of the known world.

In this scenario, the amphora was not regarded as a suitable container: it was fragile, bulky and, since it required at least two people for the loading and unloading operations it should not be too heavy. Be­cause of this, it had a very low capacity.

The barrel, on the other hand, being more manage­able, could be lifted with winches without too many dangers and was able to contain hundreds of liters. In a certain sense, it can be said that thanks to the barrel wines could easily be transported for long dis­tances constantly and efficiently, thus making the use of barrels so well known that they lay the founda­tions of the current world of wine. Today, the choice of terracotta or wood is luckily not based on logistical issues but only – and here is its beauty – on organo­leptic reasons.

How old a procedure is compared to another can’t be the reason for prevarication, but rather a reason for precious diversification, otherwise why stopping at amphorae and not moving backwards?

A pioneering and entertaining article on the history of wineskins was published in a recent publication on the history of leather. The Greek word ἀσκός is perhaps not very familiar to us: it is the sack of skin (wineskin) mentioned in the Gospel of St. Mark, where it is said “Vino nuovo in otri nuovi”. Could this be the solution to go back to the golden age? I don’t know, but it is believed that the more the history of wine is investigated, savouring its complicated heterogeneity, the more we shall be able to understand that diversity enriches and unifies, rather than dividing.
by Daniele Ognibene
www.ilsommeliermagazine.it

The search for the perfect match, able to enhance the flavor of a dish by eliminating the taste habituation, is perhaps the most difficult but stimulating task for every sommelier. In the choice of the right wine, the variables to be considered are many and often the preparation of...